The Road to Rome 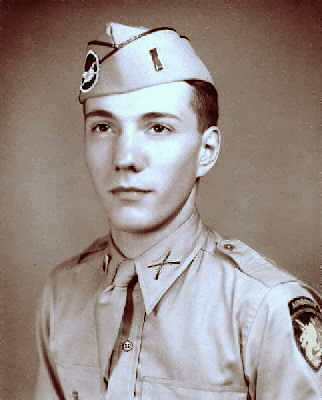 I had just turned 23 when I arrived on the Anzio Beachhead, 30 miles south of Rome, and was assigned to the 7th Infantry, 3rd Division. It was February 1944 and I was a replacement Infantry Lieutenant. Vivid memories of the combat which followed were etched in my memory forever. At night, the constant rumble and flutter of artillery overhead, theirs and ours. The rattle of machine gun fire, ours slow, theirs rapid. The ricochet of brilliant tracers skyward; ours red, theirs green or white. The wavering light of a parachute flare, lighting the flat and desolate landscape. The solid mass of white searchlight beams and red antiaircraft tracers over the harbor during air attack.

Outnumbered by the enemy two to one, with our backs to the sea. The sheer terror of incoming 88 mm fire from a German Tiger tank. The haunting cry of "Medic!" echoing through the night. And on a rare quiet night, the sound of the Krauts singing Lili Marlene. Bloated corpses and black flies. The sickening odor of death. Cold C or K rations. No sleep. Rain. Mud. Trench Foot. Malaria. The incredible loneliness. The joy of a letter from home! Sixty-seven days without a change of clothes. Horrendous casualties! More than 100% in the 7th Infantry Regiment plus an equal number lost to malaria and trench foot. Thousands of good men died there, three thousand in the 3rd Division alone.

And finally, reinforcements and the "breakout" at dawn on May 23, 1944. My Division lost three thousand men killed or wounded in the first three days. We fought our way through the battered town of Cisterna at night. Fires were everywhere from artillery and white phosphorous mortar fire. We choked on smoke, cordite, and cement dust from the shattered concrete buildings. A Sherman tank supported us, obliterating enemy strong points with its 75mm cannon at point blank range. The streets were littered with corpses lying where they fell, abandoned weapons, destroyed vehicles and collapsed buildings. This was what Hell must be like.

"The streets were littered with corpses lying where they fell, abandoned weapons, destroyed vehicles and collapsed buildings. This was what Hell must be like."
We fought our way north through the mountain villages of Cori, Giulianello, Artena, Valmontone, to Pallestrina. The fighting was savage. We left a scene of desolation behind us, burning tanks and vehicles, dead men and horses bloated in the Italian sun, their eyes and wounds covered with swarms of huge black flies, the odor indescribable. Fire, smoke and collapsed buildings destroyed by tanks, artillery and fire. Abandoned weapons, helmets, ammo and equipment of every description littered the landscape. Columns of Kraut POWs trudged to our rear in shock, helmets and weapons gone, hands clasped above heads bowed in submission. The residue of war.

Twelve days of bitter fighting and on the night of June 4, 1944, I reported to Colonel Wiley O'Muhundro's dugout, as ordered. "Lieutenant, there's a rumor that the Krauts have declared Rome an open city and are pulling out. I want you to take a patrol into the city and find out if it's true. And get back here fast. I'll have the 1st Battalion on trucks. I want my Regiment to be the first to enter Rome." I took four jeeps with 50 caliber machine guns and headed toward Rome with15 men. It was pitch dark. Smoke made visibility worse. We passed burning American tanks and recon vehicles, and dead soldiers along the Appian Way. We met no resistance. We saw nothing alive.

After five miles, we entered the city which was ominously silent. No trace of light anywhere. We saw no Krauts, no Americans, no civilians. In the total darkness, we expected to be ambushed at every corner. It was deathly quiet. Spooky. I had a street map, but I dared show no light to read it. We pressed on but were soon lost amid the narrow winding tunnel-like streets. Until we rounded a bend, entered a huge cobblestone piazza and there before us stood the Coliseum, silhouetted against the first blush of pink light in the eastern sky! It was a sight I'll never forget! The thrill of a lifetime! I stood in the midst of 2,000 years of history and I felt a strong sense of having added to it.

My driver found the way back and I reported to the CO. "How far into the city did you go," he accused? "As far as the Coliseum," I told him. He grinned and ordered the 1st Battalion in on trucks. Two days later the Allies invaded Normandy. We were no longer fighting alone.