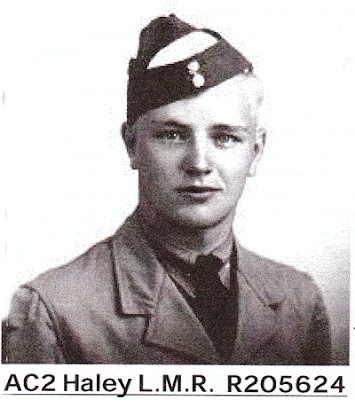 Canada declared war on Germany early in the morning of Sunday, September 3 1939. We had heard the news on the radio while milking the cows so the church was all abuzz with it. It was a beautiful warm, sunny day so in the afternoon I walked up to where the new house was being built on the farm purchased by Howard Hoover in Delhi. No thought ever entered my head that day that one day my mother and father would be living in that house. I had just turned 17 ten days before and had decided not to return to school for the fifth year because matriculation filled all my needs. At the house was the hired man that worked for Bob Lee. We talked about the war and he said he was going to enlist the next day. He did and was in the first army units sent to England later in 1940. He chafed in his letters to me about lack of action and finally was part of the contingent sent to Dieppe. He ended up as a prisoner of war, was released after VE day, purchased a farm through VLA north of Woodstock and at this date is still living there. I carried on helping my father on the farm.

Eventually conscription notices started coming but of course mine were deferred because farming was a vital industry. It was not long before the British Commonwealth Air Training Plan began to be put into operation and planes of all types began to fill the sky predominated by the Harvards from Aylmer airfield. On December 7 1941 Pearl harbour was bombed and the war began to escalate. I began to talk of enlisting and Dad encouraged me. He would have given anything to have been able to join up himself because he was too young at the First World War but having me do it was next best thing. We decided to wait until the next harvest was over and I would decide then. The RCAF recruitment centre was in the old Simpson store at the south west corner of Richmond and Dundas Streets in London and the RCAF was the only option for me but joining up was not an instant event. They had to make sure you would fit into their specifications and were in peak physical condition.

After my first initial application for enlistment in August 1942 I was called back to London several times for tests of all kinds, aptitude, IQ, eyes,ears, etc, etc, but finally on November 13 1942 I was sworn into the RCAF and given the regimental number of R205624, a number permanently implanted into my brain. However the training shedule for aircrew in the British Commonwealth training plan was very tight and at that time the next slot to start aircrew training was after the end of the year. Rather than spend that time doing odd jobs in the airforce while waiting I opted to take unpaid leave until a training slot was available and be able to help my parents for as long as possible.

During the winter I was sent study material at regular intervals and had to send in examination papers. This gave me a lot of basic material needed for flying. The winter passed and I was sent a bus ticket and told to report to London CPR station on Richmond St North bringing nothing except the clothes on my back and an empty suitcase. At the station I reported to a sergeant and with more than 50 other chaps waited for the train which took us to Toronto and stopped at the Exhibition Grounds to let us off. We were formed up into a rough formation and hustled into the building that said CATTLE in big letters over the door. And from then on that is what we were, CATTLE!