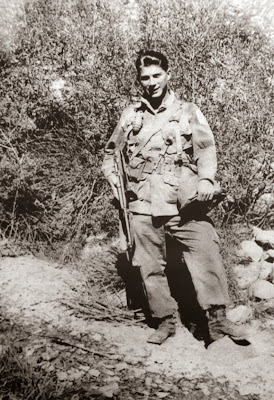 We arrived over the coast of Southern France and jumped around 4:30 AM. We were suppose to jump around a place called La Muy about 16 miles inland from the Coast. When they made the Invasion plan, they did not realize that the Coast and miles inland would be covered by low clouds. When my Chute opened I went into what I thought was a ground fog and was preparing myself to hit the ground. It was not ground fog but a cloud that I had went through and right away I went through another one. when I came out of That one I could see the whole coast below me and I realized that they had dropped my outfit in the wrong place. I was over land but not by much and I tried to slip my chute inland to get away from the water . I landed about 200 yards from the water.

We landed in and around the resort town of St Tropez. I found out later that one whole plane in our flight dropped there load of Troopers into the Ocean. Non survived.

The Troops we encountered were not first rate . One of the cement Forts on the beach that we captured had a German Sgt, and a German Corporal. The other 14 or so troops were a mixture of other nationalities from different Balkan Countries that had been impressed into the German Army' They had German equipment and German uniforms. They gave up pretty quick when we put heavy fire on them. We took a lot of Prisoners and turned them over to the 3rd Infantry Division when they got ashore.

Our Guns were dropped from the Planes in 9 loads. 6 loads were loaded on the bottom of the plane attached to 6 equipment parachutes.

We had a door load of the two wheels, and a padded box with the Breachblock and the Gun sight in it and attached to a equipment chute. which we kicked out the door when we got the green jump light. Some planes dropped Ammunition bundles or what we called Para-crates, and some of the ammunition crates had a axle and two wheels and a long handle you could pull out and pull along when you moved. These guns were 75mm and originally developed for the Mountain Artillery where the Mules would carry the parts of the gun.