The Landing in Sicily 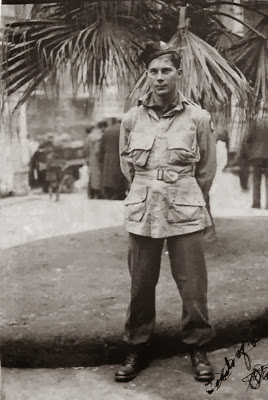 Then there were the attached Medicals teams that jumped with each Combat Team. Also a Navy Lt. jumped with us with a High powered radio so he could direct fire of the Navy ships offshore We took of from Tunisia around 8:clock July 9th 1943 in the evening and flew across the Mediterranean and jumped shortly after Midnight on the Island of Sicily. Our Drop Zone was to be in the area of the town of Gela, but very few planes hit the right drop Zone. We were scattered all over the Island, some even landed in the British zone. The pilots had orders if they could not find the right drop zone and as long as they were over land not to bring any troopers back to Africa. My Battery "B" of the 456th Parachute Field Artillery Bn. jumped with the 2nd Battalion of the 505,Para. Inf. Bn. and we were the only group that came down in the same place even thou it was about a 15-to 20 miles in the wrong place .

The plane that our 1st Sgt was in got separated from it flight somewhere while still over the ocean and did not get to the Island so they flew back to Africa and came in the next night with the 504 that got shot up so badly by the Navy and our own troops that had made the sea landings.

We were quite low when we came over the coast and got the green light to go out the door. could see the tracer bullets coming up at us but I was not in the air very long before landed. I was very disoriented as there was a lot of firing going on and I did not know which way to go and as it was still dark I could not see very far.I joined up with some 505 guys and made a attack on a tall pillbox, and when it surrendered, we attack a barracks like structure that had a dead Italian Soldier laying on a cart in back, and the occupants of this place soon showed a white flag. Before that we had found another 505 Trooper that had smashed into a jagged tree stump and was in bad shape. He was on the other side of the stone wall where there was a lot of firing going on, and as soon as it let up about 3 or 4 of us jumped over the wall, got him out of his parachute harness and lifted him over to the safe side of the wall.

I did not find any troopers from my outfit until later that morning. They were firing direct fire at another pillbox. If my memory serves me right I believe that most of the troops in the area we were mostly Italians. When we moved out that evening we left our dead and quite a few of the wounded and injured with some Medics that stayed with them until friendly troops got to them. The rest of us with our Prisoners marched all night towards Gela.