Earl E. Johnson joined the U.S. Army Air Corps in 1942 and as a pilot he participated in the invasion of Normandy, Operation Market Garden, the resupply at Bastogne, and Operation Varsity. He was attached to the Ninth Air force, 72nd TCS of the 434th TCG in the ETO. Just a few days after the invasion he send a letter to his wife, detailing his involvement in the Allied invasion in Normandy, France

Well sweetheart, her is the letter that I promised you. I'm in the Orderly room tonight so I can write and concentrate. This will be quite a letter so show it to the folks so they know what happened.

The Invasion really began for us several days before the first troops landed in France. We were restricted to our base and a schedule of briefings was published. At the first briefing, Col. Whitacre, our Group Commander, outlined the entrire operation for us. As he told his story, we realized more and more that this operation was not a scheme that one or two men stat up an entire night over. Thiswas an operation that had been decided on months before the newspapers and the people of the world started to even discuss the possibilities of such a move on the part of the Allied Nations. It was a wonderful plan from the choice of the places where the beachhead was to be established, down to the last and final part that each and every man was to execute. 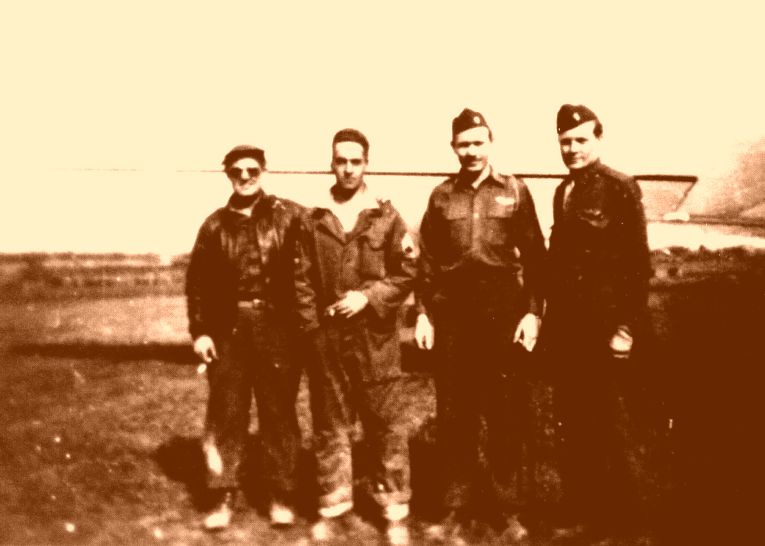 The Crew: Pilot Johnson his co-pilot, crew chief, and mechanic the morning of the Normandy invasion.

The job for our group was glider towing. In the several briefings that followed the first, we learned all we could about ourt courses to and from the landing zones of the gliders. We memorized courses and distances; locations of the bodies of enemy units; studied photographs of France over which we would follow from the time we took off until we landed. We learned procedures in case we were forced down into the Channel.

Unfortunately, I didn't go on the first trip. Now don't worry. It wasn't because of anything I had done. I wouldn't have taken te risk of goofing up and missing the show we had trained so long for, for anything in the world. The first serial took off early in the morning of D-day. What a sight it was to see all the running lights in perfect formation as the group assembled over the field. It was beautiful Needless to say, I was excited that night and had a hard time going to sleep.

Everyone had quite a time when the ships returned that morning. They were telling their experiences and comparing theirs with the other fellows. I got quite a kick out of Stanley. He told about how, after they had been over France for sometime, and nothing had happened, he said to himself, "H---! this is going to be a milk run." He no sooner got the words out of his mouth when a stream of tracer bullets flashed by his cockpit windows.

Well, our turn came late in the afternoon of D-day. We had quite a rough time of it on the assembly because of propwash. Nothing flies well in propwash in any condition, so you can imagine what a time we had with a loaded glider in tow. The rest of the trip went well. It was carried out better than many of our training missions. The entire mission was flown in daylight. I might say that we weren't very careful about where we dropped our ropes. As soon as the glider cut loose, we dropped them. Later we found out that the ropes caused considerable damage to the German communication system.

Within a few hours after landing, we were in our ships again, and ready to take off. We had coffee and sandwiches in between missions, so we felt pretty good.

The take-off and assembly was messed up because of bad weather. Practically all the ships lost the one ahead of him and all there was left for us to do in that case was to circle the field. We received instructions to go to our first check point where conditions where better and with day light coming on, the ships fell into formation by two's and three's. Even whole squadrons came along and dropped into their proper position. It was a wonderful piece of flying by everyone concerned.

We didn't run into any more trouble until we had crossed the coast of France and were approaching the landing zones. Somehow or other we started bunching up and our ship was flying closer to the glider ahead of us than at any time I had ever practiced in a glider tow. In addition we were flying with propwash again which was so bad that several cases Paul had to use full power to keep our altitude and position in the formation. I have never seen a man push and pull so many controlls and levers in such a short time as Paul did.

Well the gliders cut, we dropped our ropes, and headed for home. Now here comes the good part. What do you think was waiting for us when we walked into our interrogation room? Nothing less than a shot of good Scotch whiskey for each mission. I had my two put into one cup, and sipped it, savoring each and every sip I took. By the time they had finished interrogating us and the critique was over, I was more than half gassed up. I guess being tired and hungry mad the liquor affect me more. Well anyway, we went to breakfast and now in addition to the Scotch we each got two FRESH EGGS. Well! By that time I was ready to fly to Berlin in a kiddy car just to get some more of all that. Pilot Johnson flying with his C-47 over the Invasion fleet.

Nothing happened the next two days. Then the glider pilots started to come back. All I can say about them is that this group knows what heroes look like, and every one of the GP's is a hero. Two of my good friends who were GP's didn't come back. The last that was seen of them, was they landed and were running into a woods, chased by many German soldiers. Later the woods was searched but none of their bodies were found. We all are hoping that they evaded or are prisoners.

Well that's about all there is that can be told, my dear. We haven't done anyting since then, but we have hopes.

As I look back, I shall never forget all that I saw. I saw hundreds of naval vessels of all kinds; some shelling the enemy, others sweeping for mines, many up on the beach being unloaded, and their cargoes carried to definite assembly points. Men working their guns, or carrying supplies, or helping wounded. At one place I saw about 50 men standing in a shell hole watching the airplanes fly over them, and looking as if there wasn't a thing in the world to worry about. This was at a place less than a mile from the German lines. I saw houses that looked like they hadn't been touched by anything and a few feet away were just four walls or less of houses that had been hit by shells or bombs. I saw cows in fields about a mine from enemy lines; grazing contentedly, and once saw a Frenchman out in his field herding his cows together to take them to a barn. I saw cows run in all directions when a shell struck in their pasture. At times it was hard to understand that there was a war being fought within a few thousand feet.

I can't think of any more to tell about, darling except that I love you and that I am looking forward to the day which isn't far off when I can hold you in my arms once more. Please take good care of youreself, and remember, I love you, dearest.

Your loving and devoted husband,

Lt. Col. Earl E. Johnson was recalled to active duty for the Korean War, he passed away, age 93 in 2015. He pursued a career in the Airforce after that and also saw action during the Vietnam war. He retired from active service in 1974. Earl E. Johnson received the Bronze Star. 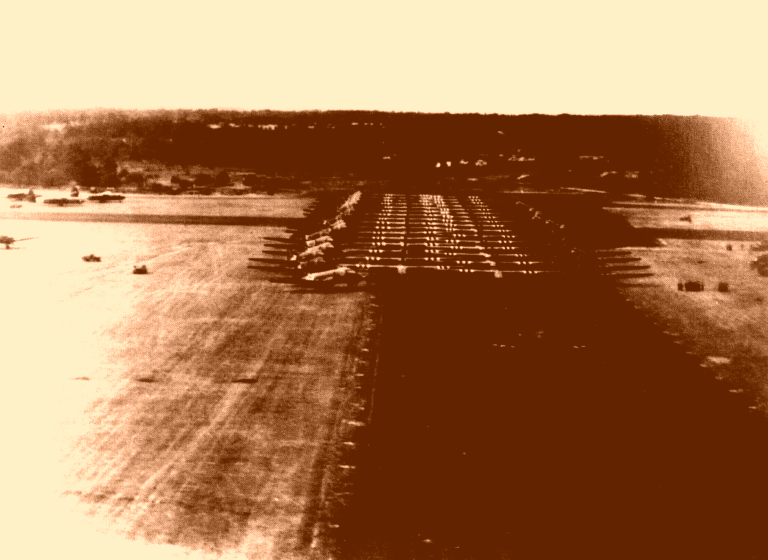