After Corker Hill, we boarded "Royal Scotsman." It had been a ferry between Belfast and Glasgow, with rudders fore and aft and a round bottom, so as to negotiate the River Clyde to narrows where it could not turn around. It was "converted" to troopship by removal of the forward rudder and the installation of landing craft davits and hammocks for the troops. She was a rolling, pitching horror and our home for more than a month during training and voyage to Africa. Pots had to be lashed to the stoves and supplies tied unto their shelves in the slightest of weather. One rough morning I asked the Scottish cook what was for breakfast. He answered, "Rrrrrolled oats, Laddie, rrrrolled all over the bloody deck!" He became a friend and came to see me off when we boarded the landing craft for the invasion. His last words were, "Dinna git yer feet wet, Laddie!"

A & B companies landed at Arzew, North Africa and the remainder of the Battalion landed a mile to our right. Our purpose was to secure this small port and cover the right flank of the 1st Division which landed on beaches to the west of the town. We landed at night and achieved complete surprise. Fort du Nord was on a hill overlooking the town, and there was another, smaller one on the east edge of the town, both with coastal batteries; both were reduced quickly after brief firefights. The town and the forts were defended by French soldiers, there were few casualties both sides. We lost one man killed. C company advance up the road towards Oran to St. Cloud where it ran into a determined defense by the French Foreign Legion. The company commander and 2 men were killed. 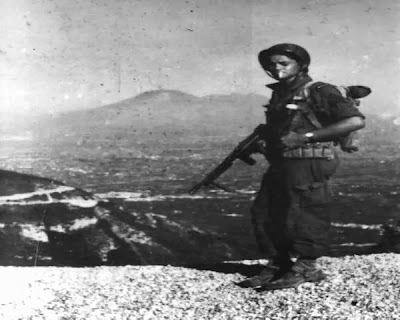 After a week's mopping-up in and around the town, we stayed at Arzew for 3 month's rigorous training, including simulated assault landings, then, with little warning, we were flown to Algiers and thence trucked to Gafsa on the Tunisian front. The first mission was a raid on Sened Station, a fortified outpost, 2 nights march from our lines out into the rocky barrens of the desert. Sened had already been won and lost by American troops before us. The predawn attack was a surprise, a complete success and many of the defenders were killed. One Ranger was killed 10 Italian prisoners carried back our several wounded.

The next day I had the good fortune to bath in ancient Roman baths in Gafsa. In tiny cubbyholes carved from the solid rock walls of a cave, each served by a stream of hot water spurting from the wall, attendants scrubbed bathers with volcanic sand. The finish consisted of plunges in cold and hot pools.

Before we landed, Montgomery was driving Rommel back thru Libia. After we landed, Hitler rushed troops into TunisTunisia. At Gafsa we met some of Rommel's troops, but our 2nd Corps took the brunt of it at Kasserine Pass, on our left. We had to retreat before the superior German force and my company was the rear guard while the main body pulled out to the rear. After this we were told to get back to Tebessa (perhaps 30K)as best we could. My buddy at the time, (Winsor) began jogging up the road towards Tebessa and got several miles before we came upon the tail of a column of trucks filled with Ghomes (French native troops). (I tell this in detail to illustrate the principal reasons I got through my war relatively unscathed: 1. I had the reflexes of a Neapolitan cat; 2. I was in superb physical condition 3. I was possessed of a highly developed instinct for survival.)

Winsor and I decided to hitch a ride on the end truck as did our Lieutenant (Dunnigan) who came up at the same time. The truck was full of Ghomes, some seated on benches along the sides of the trucks and others (like me) standing in the crowded middle. Dunnigan was seated on the tailgate and Winsor was still on the road when two flashes, accompanied by loud reports, appeared at my feet. Somehow, I vaulted over Ghomes and the left side of the truck and was on the roadbed when two hand grenades went off in the truck, killing and maiming many of the occupants. I alone got out of the truck and was on the road within the 5 seconds between flashes and explosions. We found that Dunnigan had scooped up his grenades from his defensive position without recrimping the cotterpins he had straightened in anticipation of their use; the pins had come out as he landed on his seat. We left him with the medics, sure he was dead; actually, he got just one piece of shrapnel in his hip, his wallet full of Francs saved him from more severe injury.

We reassembled at Tebessa and advanced to El Guettar, where, during an important Corps offensive, we made our way through near impassable mountains and descended upon the right flank of the enemy, killing and capturing hundreds. We then carried on for a week or two during the offensive when we were relieved and sent back to Nemours, Algeria to form and train two more battalions of Rangersthe (reconstittuted) First, with the Third and Fourth. The Second was already formed in the States. Then we went to Sicily another story.